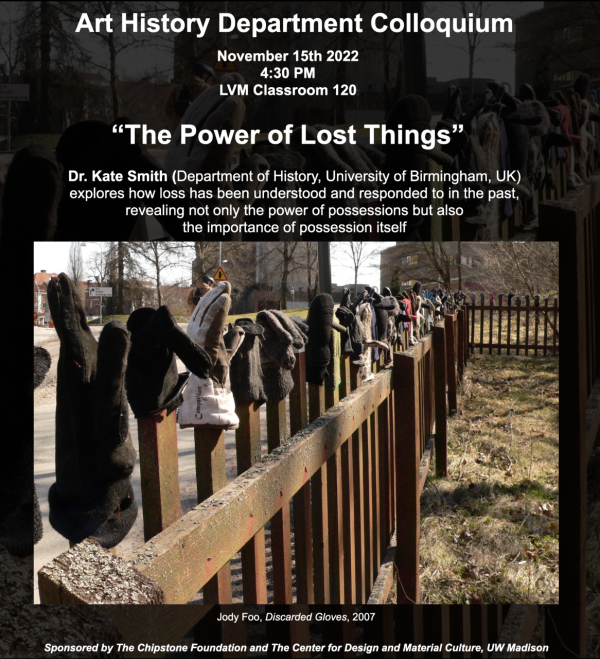 Join the Art History Department for their monthly Colloquium on November 15 at 4:30PM (LVM 120) for “The Power of Lost Things,” a talk by British historian Kate Smith from her new book project, tentatively titled “Losing Possession in the Long Eighteenth Century.”  Dr. Smith’s visit is sponsored by the Center for Design and Material Culture in SoHE.  Reception and snacks to follow (in the Hagen Room)!

*Dr. Smith examines what it meant to own and possess things in the long eighteenth century when greater numbers of Britons came to participate in ownership and the range of ‘things’ they possessed increased. She does so by looking to moments of loss and losing.

This paper explores how loss was understood and responded to in eighteenth-century Britain, to reflect on the nature of loss in a particular historical and cultural context. It finds that in an age of shipwrecks, war, and fire, loss existed as a central preoccupation. On a more mundane level, the growth of cities and the challenges they presented meant loss was an everyday reality. Things could be stolen, but they could also be dropped and mislaid as city delights distracted their owners. Some “possessions” could also wander off of their own volition and intentionally run away. In response, Londoners created elaborate systems of reclamation to ensure that lost things could and would be returned to their owners. They placed such emphasis on restitution, this paper argues, because owning things and keeping hold of them became central to claims of personhood and self-possession in this period. Rather than the emotional pull of possessions then, in eighteenth-century Britain we see different concerns at stake that are revealing not only of the power of possessions, but also of the importance of possession itself.

Our possessions and our ability to possess are often threatened by loss. Things are liable to be stolen, forgotten, broken, and destroyed. What we do in response to such loss is telling, not only of our relationship to those possessions but also of the importance we give to possession more broadly. Our responses also illuminate the meanings we attribute to loss and losing and in turn shape how such concepts and experiences are understood by others. Loss and losing are culturally and historically contingent experiences that are produced by and produce specific meanings.

This event is sponsored by the Chipstone Foundation and the Center for Design and Material Culture.