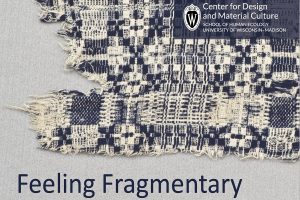 By Maeve M. Hogan (she/her), a Ph.D. student in Design History and the 2020-21 Jane Graff Fellow in the Helen Louise Allen Textile Collection at the University of Wisconsin–Madison. Her research focuses on craft and domestic material culture as they relate to modernity, nostalgia, and narratives of identity.

Graduate students engaged with Material Culture Studies closed out the academic year with a day-long symposium titled Feeling Fragmentary. The symposium carried on a tradition of semi-regular conferences led by graduate students in the Material Culture Focus Group. Inspired in part by the loss of connection and opportunities for interdisciplinary interaction as a result of COVID-19 physical-distancing requirements, the event brought together thirteen graduate student speakers and four moderators, from eight different departments across the UW–Madison campus, to discuss their research as it relates to the study of material culture.

The symposium theme took inspiration from the isolated fragment, and the methodology of material culture studies, using them to develop a framework for intellectual connection. The talks themselves were also fragments of a kind – short introductions to each speaker’s larger body of work and interests. Speakers, moderators, and audience members were encouraged to seek connections between presentations within and across panels and disparate disciplines. Speakers investigated the aesthetic and metaphorical properties of fragments, drawing out their potential to evocatively point towards a larger, imagined whole.

Some of the presentations addressed material fragments in a literal sense, and the evidence that these objects leave behind. Morgan Lemmer-Webber (Art History), presented her dissertation research on the fragmentary evidence for wooden Roman two-beam upright looms. Tania Kolarik (Art History) explored motifs in a single textile fragment exposing an intercultural visual language of power and cross-cultural economies. Other presentations dealt with fragmentation in systems and networks, or fragmentary archives and records on personal and communal levels. Yishai Barak (Bacteriology) presented on mycorrhizal colonization of the burr oak, symbiotic communication and the results of human intervention in these complex systems. Molli A. Pauliot (Cultural Anthropology) spoke about the imperiled black ash tree and embodied and scientific creativity in the persistence of Ho-Chunk basketry.

Svea Larson (Folklore and Scandinavian Studies) also engaged with embodied knowledge in her presentation on food and cooking traditions and the translation of that knowledge into and out of cookbooks in America and Sweden. Tabitha Faber (Botany) dug deep into the taxonomies of plants considered ‘edible,’ ‘nutritious’ and ‘toxic’ to engage with scientific and cultural knowledge about the utility of plants to humans. Jared L. Schmidt (Folklore Studies) and Kayla Bauer (Art Department) presented on records and how they create meaning out of disparate data points. Schmidt discussed ongoing digitization work on the ledgers of an 18th-century merchant in colonial Virginia and their utility in exposing complicated networks of exchange. Bauer presented a more personal approach to record keeping, speaking about her artistic practice of documenting and cataloging childhood keepsakes and the self knowledge produced as a result.

Other speakers examined repair and its meanings in historic and contemporary contexts. Addison Nace (Design Studies), spoke about the function of darning as a mending practice as well as cultural anxieties about the implications of the perceived decline of that skill. KT Simmons-Uvin (Art Department) described their own art practice in fiber as a processing and self-nurturing tool which became essential during the strain of the past year.

The day concluded with speakers who asked the audience to think of their research as part of a larger process. Here, fragments served as a jumping off point for creative, forward thinking about potential futures. Becca Owen (Art History and Gender and Women’s Studies) considered sculpture as fragmentary material records of the artist Cassils’ ephemeral performances. Elise Kerns (Literary Studies), discussed futurism, primitivism, and slippery modernist ideas of both in her presentation on costume and dance in Fritz Lang’s Metropolis. Nora Renick Rinehart (Design Studies) spoke on the elements used to compose and design artworks in her show Flannel Futures.

Throughout the symposium, these research fragments, and research on fragments, presented the assembled audience with an opportunity to contemplate interconnection, interdisciplinarity, and the value of working in conversation with others. What might previously have been understood to be “incomplete” or “broken” became a useful tool for interpretation. Ideas distinct to one discipline might inspire creative thinking in another department. Feeling Fragmentary allowed like-minded individuals to meet one another and greet old friends as we begin to transition out of isolation and back to a more connected way of working in the coming year.

The event was supported by the CDMC, and Professors Ann Smart Martin and Sarah Anne Carter. It was co-chaired by design history Ph.D. students Natalie Wright and Maeve M. Hogan.