Join us once a month during 2022 on the CDMC Stories blog for Textile Tuesdays: Red Edition! Students in the UW-Madison Design Studies class “History of Textiles” (Fall 2021) wrote these posts, choosing the color red as the theme through which they explored the Helen Louise Allen Textile Collection (HLATC). While of course red holds particular resonance for the Badger community, it also has a special place in the history of textiles. We can chart the development of textile dyeing and printing through the use of madder plants, cochineal insects, synthetically-produced alizarin, and other substances. Focusing on the color red allowed the students to feature a wide range of textiles from HLATC in terms of chronology, geography, use, and cultural meaning. 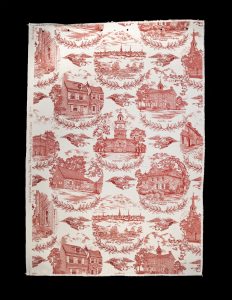 Around the time of the United States Bicentennial in 1976, Waverly and other commercial fabric companies produced numerous revival prints invoking the Colonial and Federal periods of American history. In this example, the form of the toile, a popular eighteenth-century approach to textile design depicting the landscapes and political events of the time through copperplate printing, is reimagined in screen printing to showcase the architectural heritage of Philadelphia. Sites associated with Revolutionary events, figures, and founding documents are interspersed with the iconic symbol of the American eagle, perched on the staff of a 13-star national flag. Here, as well as in other revival toile patterns, the politics incorporated are those of national allegiance, but often allegiance toward particular narratives of American history.

Prof. Marina Moskowitz is the Lynn and Gary Mecklenburg Chair in Textiles, Material Culture, and Design; Natalie Wright is a doctoral candidate in Design History.

Chintz is a plain-woven textile that a design, typically floral, had been painted or printed. This type of fabric originated in India but this particular example was made in the United Kingdom. In the eighteenth century, Great Britain actually banned the importation of similar fabrics from India through the Calico Act, in the hopes of bolstering the domestic textile industry. As the Industrial Revolution took hold, British, and other European, manufacturers replicated the styles and techniques of textiles that had earlier been imported from India. As a result of British colonization, the trade relationship started to reverse, with Britain not only supplying their own textiles, but also increasingly exporting textiles to India, exerting economic as well as political imperialism. This example of chintz exhibits a more modern design, typical of the early twentieth century. The floral design in a larger scale with heavy outlines seems influenced by the styles of the Arts and Crafts movement.

Emmy Kistner graduated in May 2022 with a degree in Consumer Behavior and Marketplace Studies.

This object is a miser’s purse, crocheted out of red silk and adorned with metal beads, fringes, and tassels. Although this particular example was made in the United States, between 1890 and 1910, this form originated in Victorian Britain, used by both men and women. They were popular partly because of how easy they were to make. The simple, tube-based crochet pattern is similar to a sock, and many patterns circulated in this era showing individuals how they could make their own. Though they were accessible, they could also be quite fine, as shown by the delicate silk used to make this object. One advantage of this bag is its asymmetry; the distinction in shape and décor of the two ends made it easier for a bag owner to tell which compartment was which. One end, for example, could be designated as holding silver coins while the other was for gold coins. The owner could easily distinguish the compartments in suboptimal viewing conditions, such as a dark room. At the start of the Victorian era most interior spaces were lit by oil lamps and candles, so this tactile approach to identifying one’s bag techniques was a clever solution to limited lighting.

Kate Forer is entering her second year of the MFA program in Sculpture this fall.

This late nineteenth-century bed cover shows a popular form of embroidery from this period. The bed cover is comprised of small white cotton squares that are embroidered with red linen thread in a simple running stitch, depicting a variety of motifs, mostly natural imagery such as flowers, fruits, and animals. Patterns and kits for this red-on-white embroidery circulated throughout the United States, either as perforated paper, which stitchers could use to mark their fabric, or as fabric with the designs stamped on in a light color. Sometimes these templates were sold in thematic sets, such as animal designs or designs from nursery rhymes, and the individual squares could be sewn together and even quilted, for bed covers such as this one, and similar patterns were available for sets of pillow cases or other household goods.

Olivia Power-Duplissis is entering her junior year majoring in Consumer Behavior and Marketplace Studies, with Certificates in Entrepreneurship, and Textiles and Design.