The political landscape of North America changed dramatically in the late eighteenth and early nineteenth centuries, with the formation of the United States. The ongoing project of establishing a new nation, amid colonial, European, and Native American political interests occurred on not only the battlegrounds of the Revolutionary War and the pages of the founding documents, but also within the home. The textiles of The Federal Home record the attempts to unify the nation through recognizable emblems, such as the eagle, and mottos, such as E Pluribus Unum (“Out of Many, One”). Textiles also depicted current events as they unfolded, inscribing new historical narratives onto the backdrops of daily life, both within the United States and abroad. Domestic production of textiles was a political tactic as leaders decided what “independence” meant economically, nationally, and individually. As much as textiles contributed to a federal mission, they were also a site for political negotiation. Almost as soon as symbols of the new nation and historical scenes became familiar, alternatives to these were incorporated, representing new political ideals, factions, and causes in the stuff of everyday life. The contested expressions of federal affiliation continued through the nineteenth century, as the boundaries of the United States expanded, with devastating impact on Indigenous communities.

These two early examples of American political handkerchiefs show how graphic symbols and images were used to create a new political arena. John Hewson, a Philadelphia fabric printer, produced the handkerchief commemorating George Washington, adapting an image by the painter Gilbert Stuart. As the central image flanked by classical columns and drapery, and grounded by symbols of political and economic power, Washington himself is promoted as an iconic figure. In contrast, the handkerchief on the right represents the 1840 presidential campaign of William Henry Harrison, one of the earliest candidates to canvass actively for the presidency. Harrison’s campaign motif was a log cabin, a new political icon that would be harnessed by other nineteenth-century political figures, notably Abraham Lincoln, to symbolize (often erroneously) the humble origins of both candidates and voters.

These icons, however, had complex histories. Washington’s symbolic associations with democracy belied his status as an owner of enslaved peoples. The imagery of the log cabin highlights the tension between the broadening of the American electorate and the forced removal of Indigenous communities. Harrison called himself “Tippecanoe,” to remind voters of his role in the Battle of Tippecanoe and the subsequent burning of Prophetstown. Harrison’s men faced Shawnee spiritual and political leader Tenskwatawa whose older brother Tecumseh led the Native American Confederacy and fiercely opposed European-American expansion. 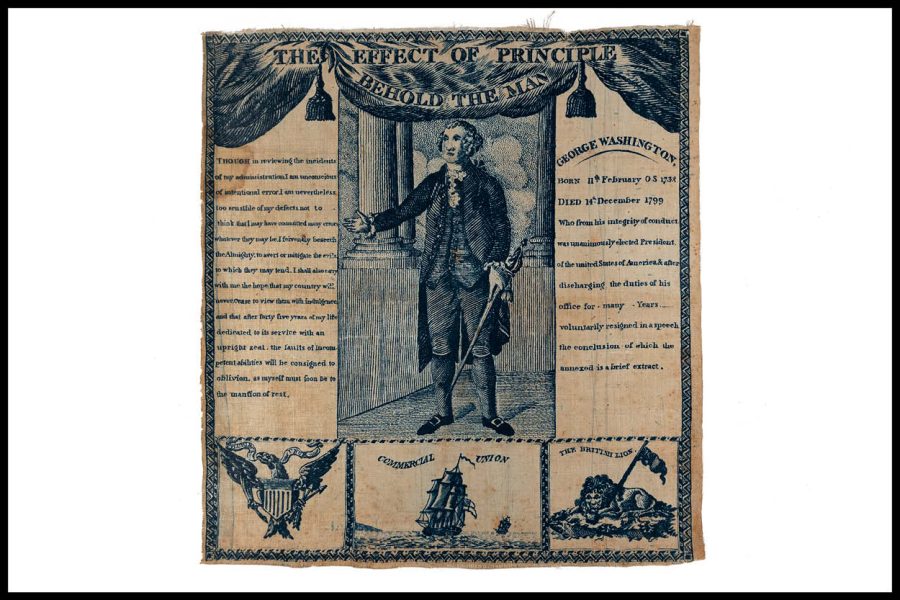 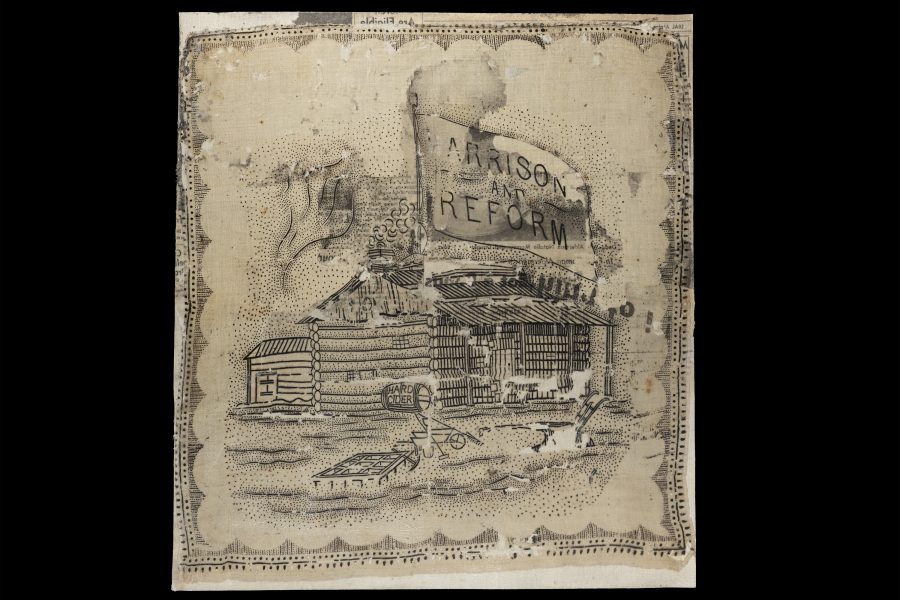 Coverlets are woven textiles used as the top layer of bed covering; they were a common feature in late eighteenth- and early nineteenth-century American homes. Originally made from wool, and sometimes later from a combination of wool and cotton, the graphic patterns of coverlets were created as the fabric was woven and highlighted the skill of the weaver as well as developing technologies of looms. There were two main types of historical coverlet design, either geometric or figured and fancy. Geometric coverlets feature patterns based on squares and circles, while figured and fancy coverlets incorporate more complex shapes and often represent flowers, fruits, buildings, animals, and text. Although bedcovers were objects of family intimacy, they were also valuable objects that were displayed proudly in the home. These more pictorial coverlets became a canvas for political emblems and mottos, showing how domestic textiles were used to signal national allegiance.

These two coverlet fragments demonstrate the distinction between geometric and figured and fancy styles of weaving. They also reflect the shift between an abstract invocation of politics to specific graphic representations of emblems and mottos. The fragment on the left was woven in a pattern from Great Britain known as the Whig Rose in reference to the British Whig Party. A similar motif was incorporated into American quilt design in the nineteenth century, potentially in line with the establishment of the American Whig Party in the 1830s. In contrast, the fragment on the right incorporates the eagle and motto of the Great Seal of the United States, as well as the phrases “United we stand…Divided we fall.” 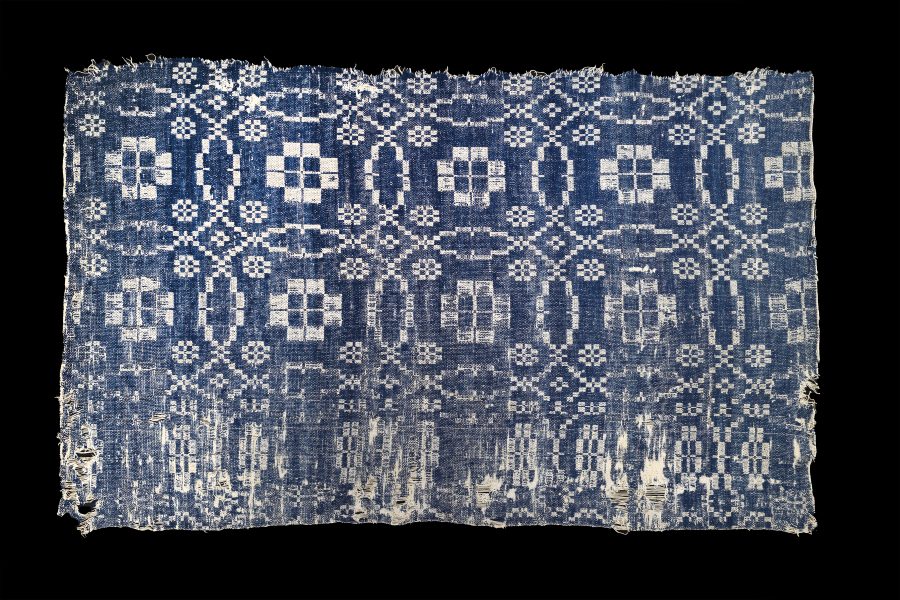 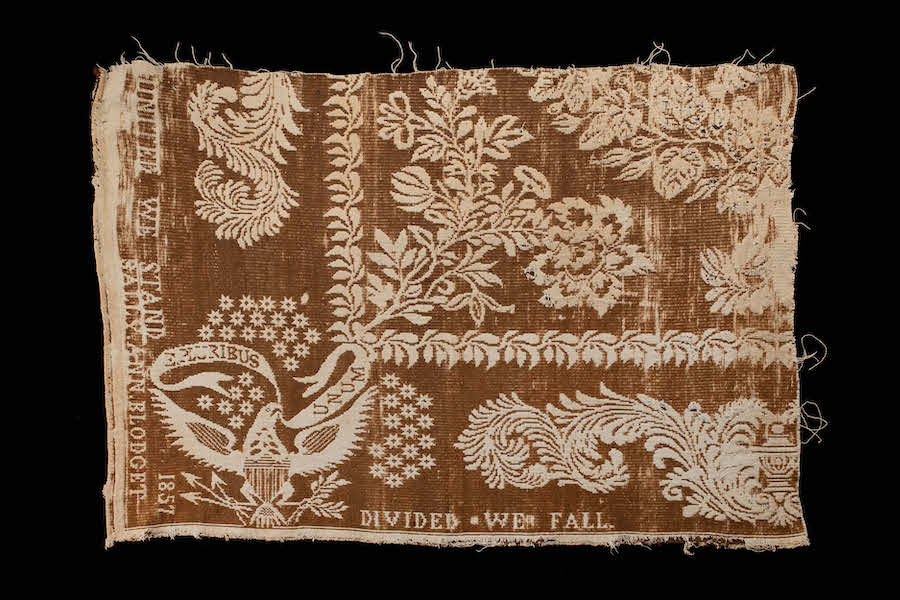 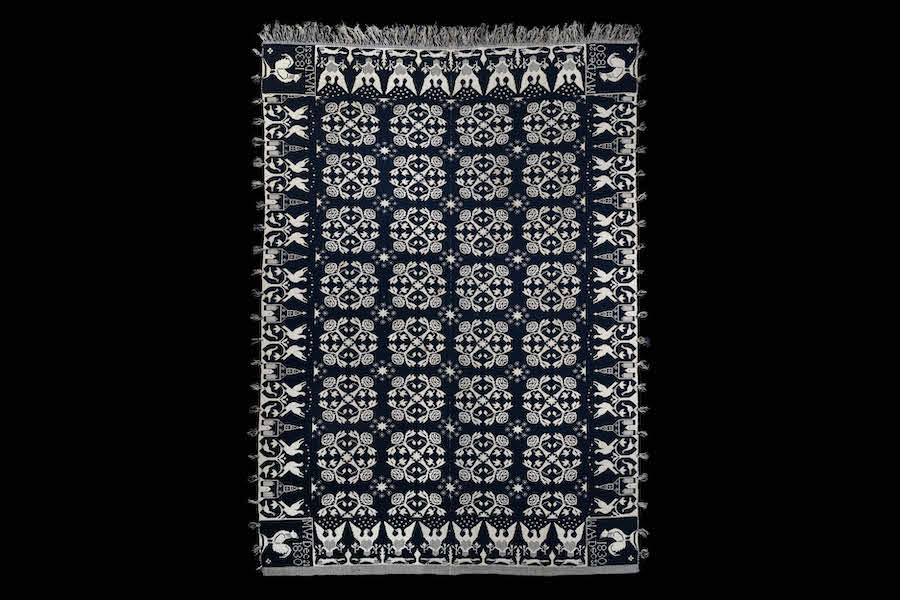 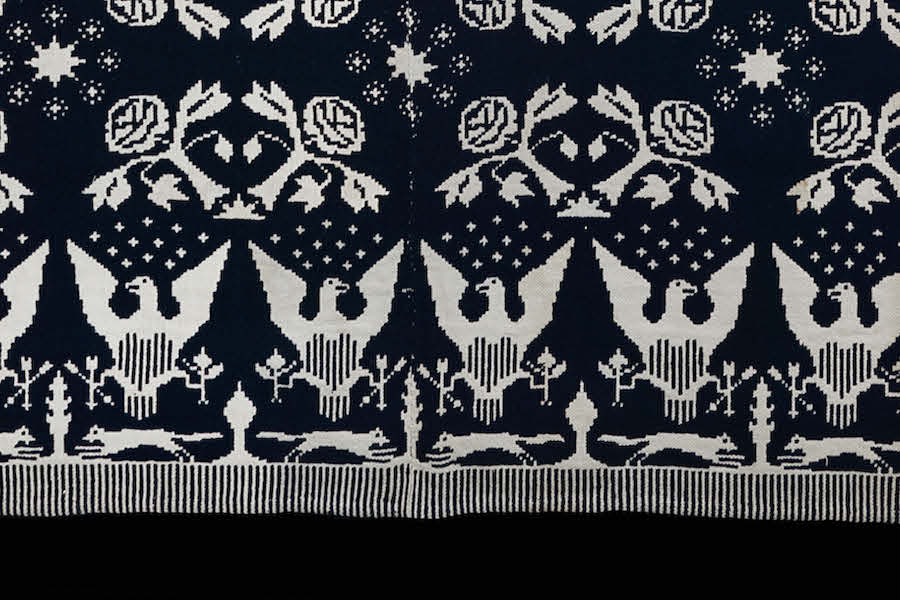 This blue and white coverlet is one of a group produced by three prolific weavers in Delhi, New York in the nineteenth century. These coverlets feature American eagles, shielded with 13 stripes and crowned with 13 stars to represent the 13 colonies of British America, which anchor their corners. 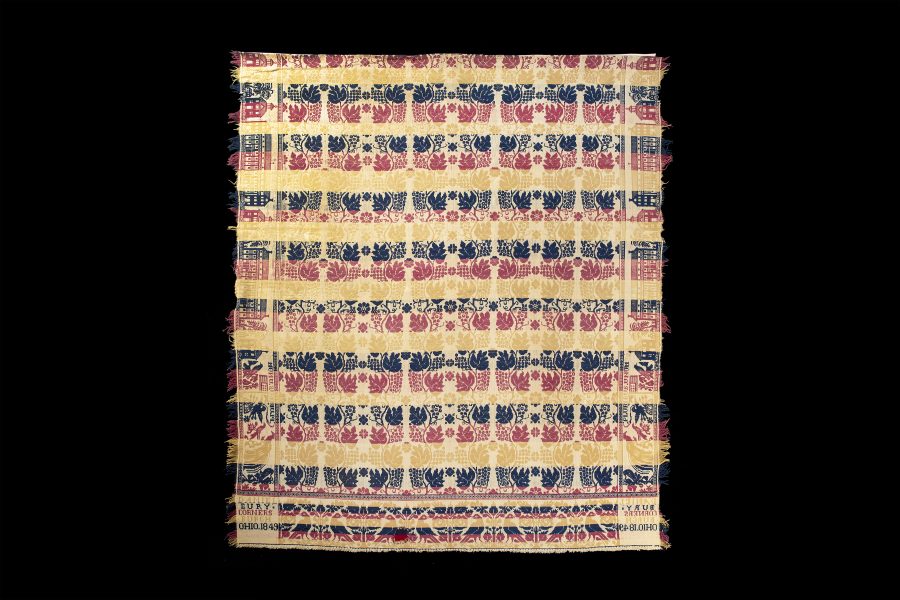 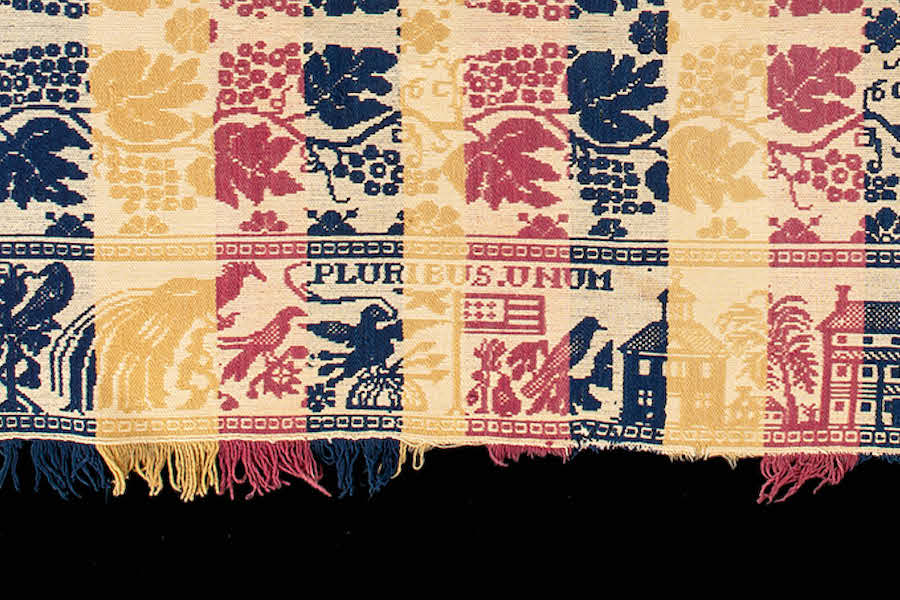 This unusual multi-colored coverlet incorporates eagles, flags, and the Pluribus Unum motto into a border design that also features neo-classical style architecture. The ground design of grape vines was a symbol of agrarian abundance; the growing of grapes was promoted by Thomas Jefferson as one pathway to an independent political economy.

These fabrics are known as toiles, short for toile de Jouy, which means cloth of Jouy, France. Characterized by landscape scenes against white backgrounds, makers have used this form to express and circulate political messages since the eighteenth century. Look closely in The Revival and Activist Homes, and you will see evidence of this pattern. These two examples represent British views of America. The drapery fabric of William Penn’s treaty with the Lenni Lenape tribe, after a Benjamin West painting, depicts colonialism as inherently good. Like many of the objects in the Federal Home, this painting uses neo-classical styles to fabricate a sense of political harmony. Caricaturist Henry Bunbury’s work inspired the Revolutionary War toile, which depicts a spy in women’s clothing along with other parodied military figures. The men struggling with their horses are from his Hints to Bad Horsemen series and emphasize the overall sense of buffoonery. 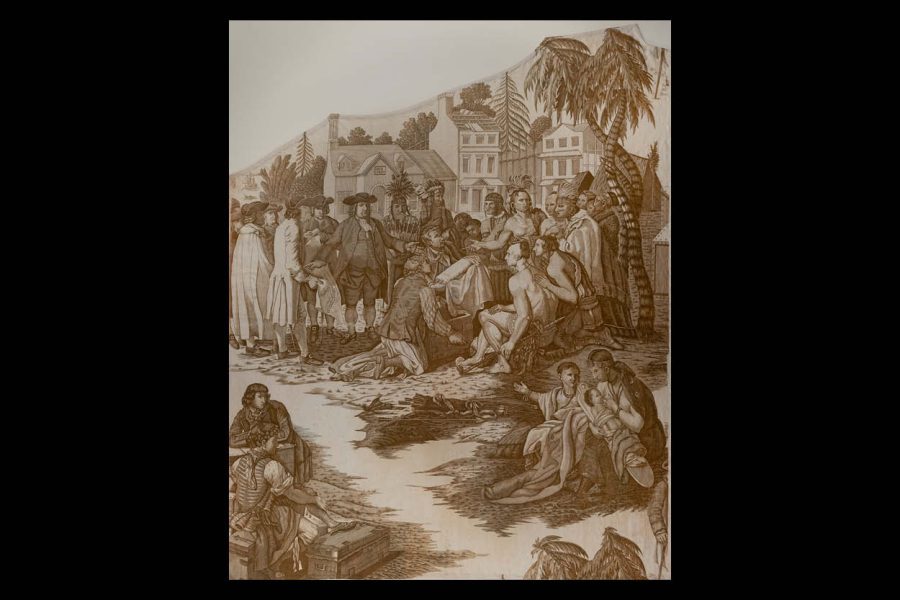 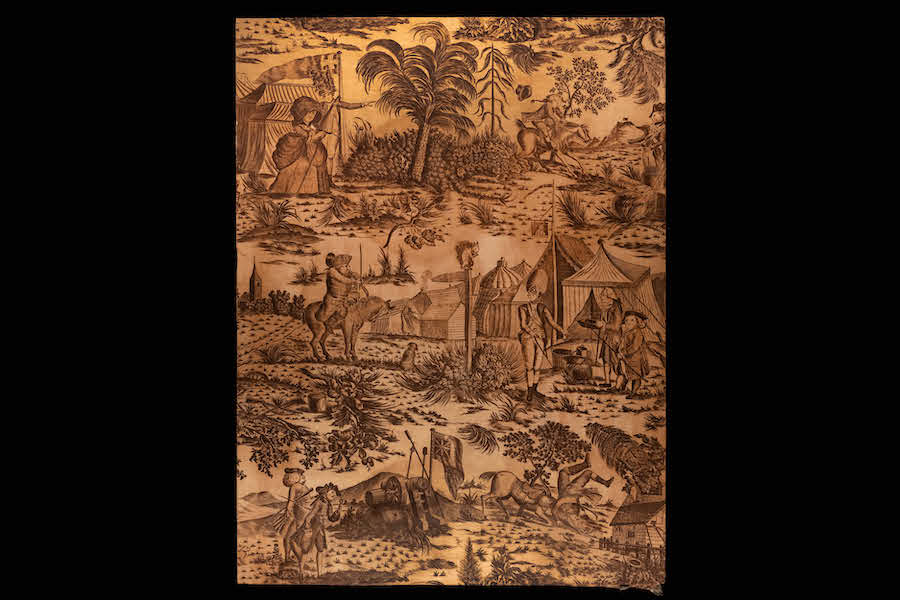 Slavery was an economic foundation of the United States. By the early-to-mid nineteenth century, cotton grown, picked, and processed by enslaved persons became the United States’ primary export. This enslaved labor produced roughly three quarters of the world’s cotton supply. In The Federal Home, cotton objects are almost certainly associated with slavery. Antislavery societies in the United States, Britain, and the Atlantic World gained traction in the late eighteenth century. The enslaved man on this toile derives from a 1791 painting by British painter George Morland. While the painting shows this figure off to the side, the person who cut this fabric made him the protagonist. This piece is itself made of cotton, meaning it is more than likely a self-critique of the slave trade. Abolitionist goods were fashionable, and examples of this kind of furnishing fabric were used for bed hangings and other important household goods. 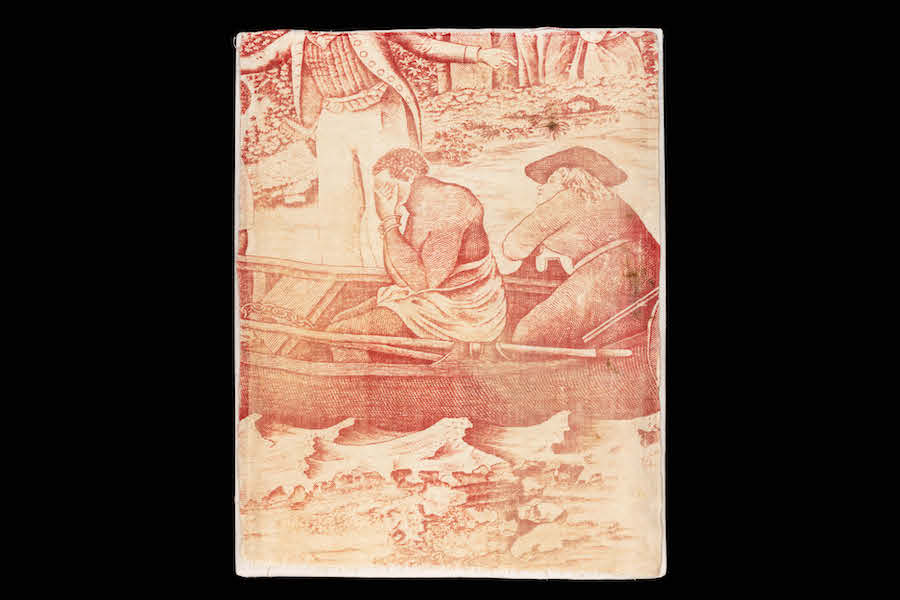 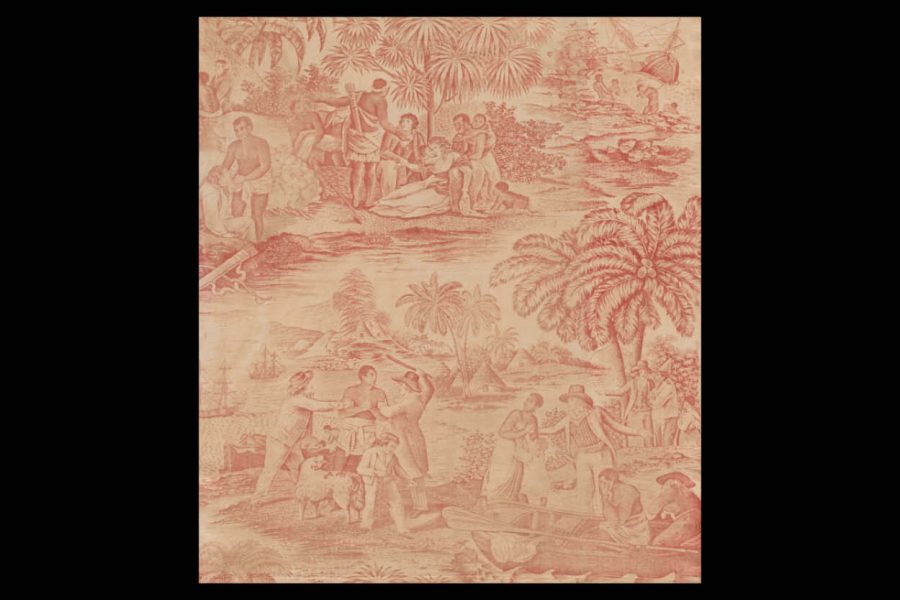 These objects document the domestic production of textiles in the Revolutionary and Federal eras of American History. Although they do not depict political symbols, persona, or scenes, they nonetheless represent a political climate in which making textiles in and for the home contributed to local and even national economies. Starting in the Revolutionary era, the production and use of “homespun”—locally grown, spun, and woven fabric such as the fragment shown here—carried connotations of national allegiance. These objects also document women’s contributions to both domestic and political economies. The objects in the top row speak to acts of making during the Revolutionary era: the needlecase (right) was made and used by Helen DeNise Forman and the strawberry-embroidered wallet (left) shows work in progress by her daughter, Margaret Forman Burrowes, both from New Jersey. The textiles below show how skilled needlework embellished garments made in the new United States. 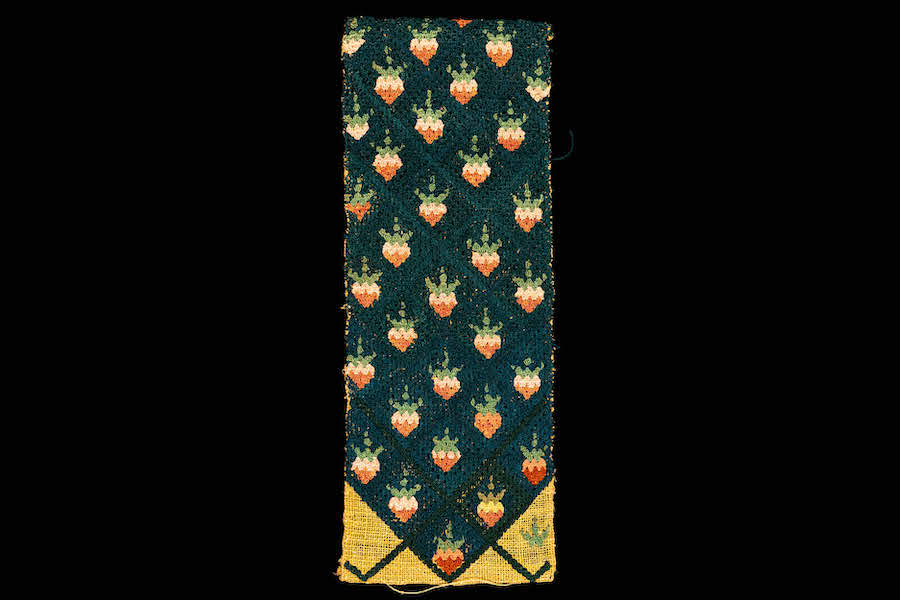 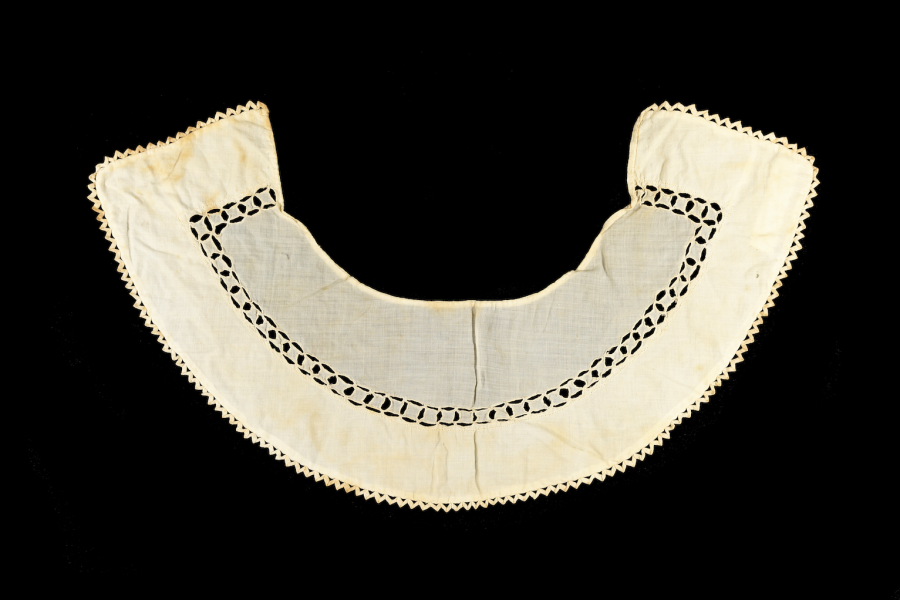 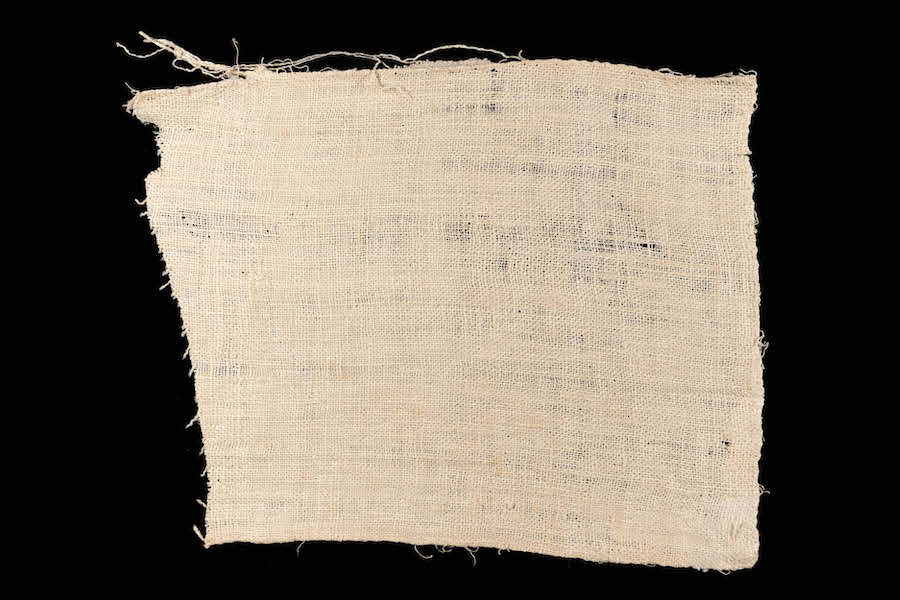 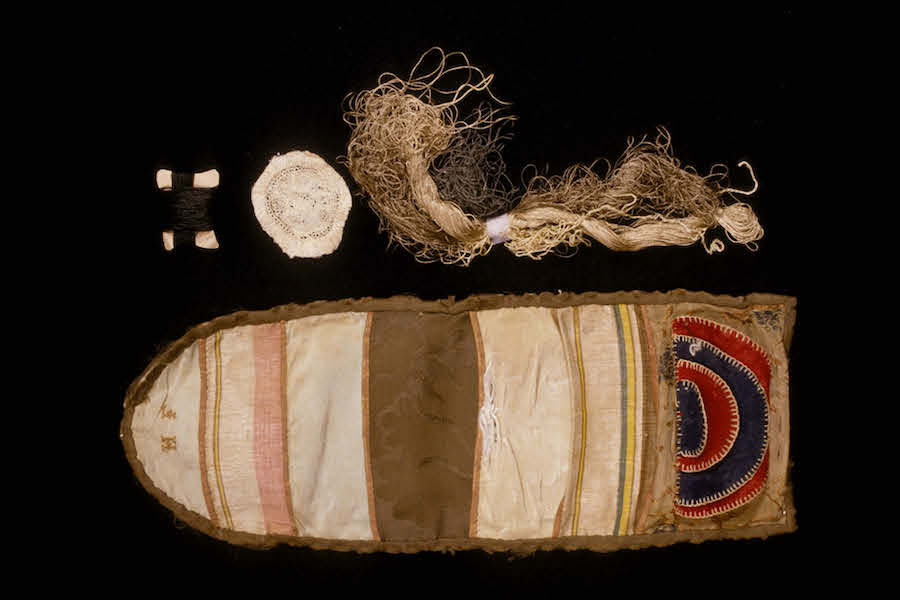 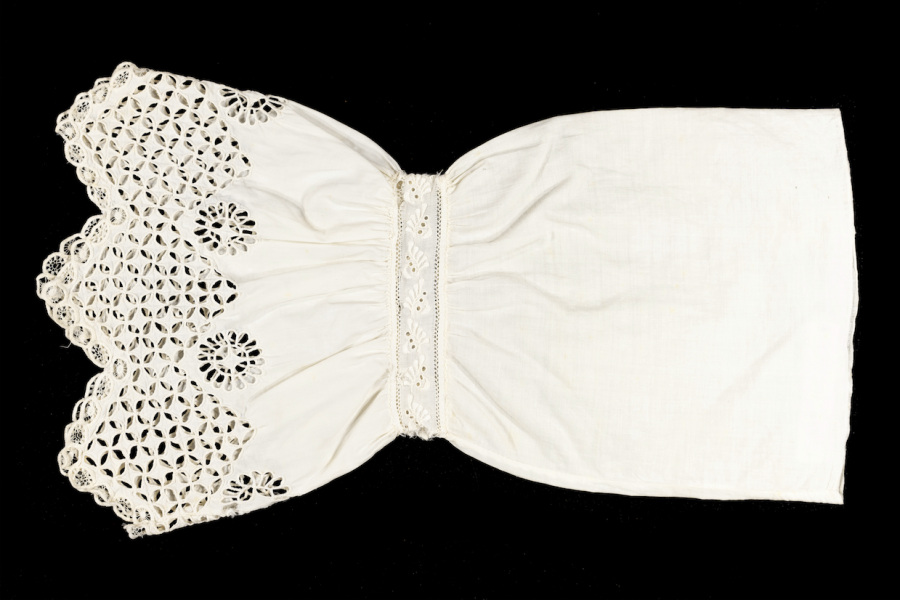 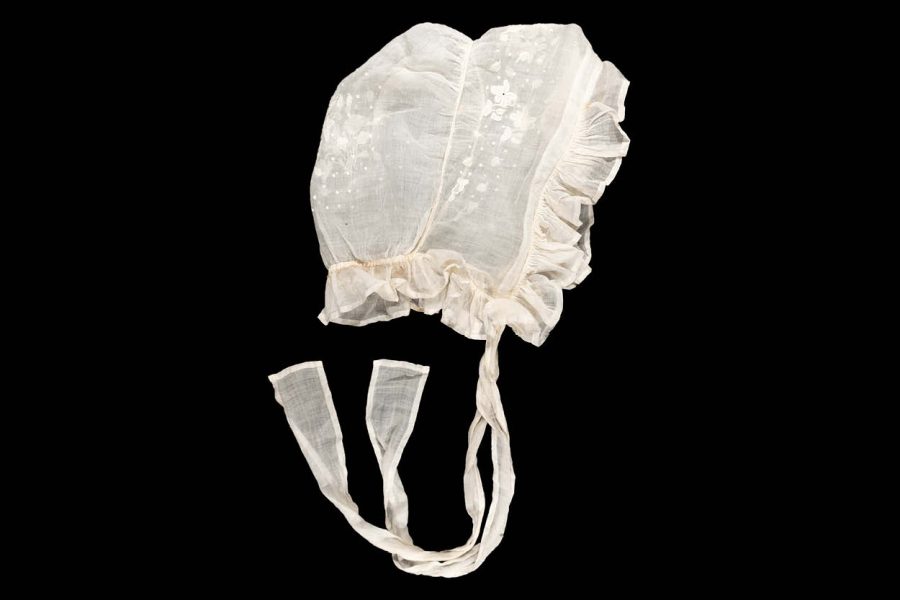